STAY UP TO DATE

Terri Lee is the name of a doll and also of a little girl. Violet Lee Gradwohl was the brains behind the Terri Lee doll. Violet was the mother of Harriet Wilma Gradwohl, born November 29, l927. The little girl, Harriet Wilma chose to call herself “Terri Lee.” Harriet Wilma “Terri Lee” had a cousin by the name of Maxine Sunderman. Maxine was a very talented artist and she designed a toddler doll in the likeness of her own child, Drienne, born July 9, 1944.

Maxine showed her Aunt Violet the doll. Violet was enchanted with the doll and offered to dress and market the doll. They took the toddler doll to New York City annual Toy Fair. It was an instant hit. Violet returned to her home in Lincoln, Nebraska to begin a new business in which she had no experience. Maxine took the toddler doll to Los Angeles to make prototypes for mold-makers and manufacturers. This was in 1946.

Back home, Violet hired workers to make this doll which had become known as Terri Lee. There was no designated place for the manufacture of this doll. This became a true cottage industry. Groups of women made wigs in basements of homes and others made long trips to pick up fabrics, lace, and patterns made of brown paper to sew up the little fashions designed by Violet herself. The Terri Lee factory was born in Violet Gradwohls's kitchen.

Montgomery Ward featured Terri Lee in their catalog that year and 8,000 composition Terri Lees were sold. They were off to a flying start with no preliminaries or experience. The success was phenomenal. The factory moved into larger quarters and hired the Tip-Top Company of Omaha to make the dolls in plastic.

The real Terri Lee (then Mrs. Robert W. Taylor) gave birth to Connie Lynn and eventually the Connie Lynn doll was sculpted and produced in 1955, A second daughter was born September 20, 1948 and was named Linda Lee. There was also a doll forthcoming named Linda Lee.

Violet was constantly making improvements on the dolls. This doll, originally made of composition (sawdust and ground up corn cobs), was being made of plastic early in 1947. There was a whole array of plastics with which they experimented. The Terri Lee came from the molds in every color, some were green and others were ivory white and every color in-between. It didn't matter as the plastic was painted the correct color. 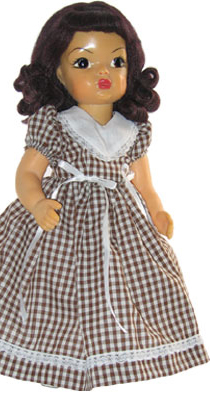 The Tennessee Eastman Company created a new plastic called Tenite II This allowed the plastic to be tinted a flesh color and painting was no longer necessary. The Tenite II plastic dolls were a bit heavier than the other plastic before or since.

The factory grew and was moved several times. Violet hired Grace Hast, a young woman with a mind for technical details to help manage the business. Grace Hast was well thought of by the fellow employees and as long as she remained with the company, it prospered. Grace moved the company to Apple Valley, California in March, 1953. Grace resigned her position with the company in 1958 and the company began its downward spiral.

This was one of the chief reasons for the success of the Terri Lee doll family. Doll clothes were made both in homes and in the factory. She was the world's best dressed toddler, sporting even a full length mink coat. This coat was made of “silver-blue mink” a mutation color that was very popular in 1940 and 1950. It is no longer being produced today. The coats were made of the “sides” as that was the shorter fur. There were 2 of these coats sold in 1953.

Other dolls created from the Terri Lee molds were Nanook, Terri's Eskimo friend, Guadeloupe or Claypso, her Hispanic friend, her brother Jerri Lee, and Gene Autry.

Collectors will find it interesting to note that from its conception in 1946 until the end in 1962, the Terri Lee wig was always made the same. The first fibers were very stiff and coarse and hard to work with, but later became much finer and softer. Jerri's wigs were at first made of curled Celanese fiber, but by 1947 was replaced with fur wigs. The caracul wigs used on the Jerris and Connie Lynns are of lamb's wool. Terri Lee also wore a poodle cut hair do. This was with the caracul wig. Don't be too quick to assume your Jerri Lee is a cross-dresser!

Throughout its continuation, Violet Gradwhol experimented with different plastics. Two of these plastics were from Dow Chemical Company and were known as Celcon and Ethocel of the “ethy cellulose” family. Dye was added to the plastics and there were dolls of many different colors. Collectors should know that parts made of different plastics in differing colors were spray painted and can be found combined in one original doll. A flesh-colored automobile lacquer was used so it was not important to use the same plastic throughout the doll.

A characteristic of these early plastics is that the ethyl cellulose plastic become brittle with age. Tell-tale signs are fine crazing similar to what you might find in composition. So far, it has only been found in the earliest dolls that have the mannequin wigs. It happens to the white Terri Lee and also the other dolls made in 1947 - Bonnie Lou, Patty-Jo, and Benjie. These dolls also have the patent pending mark on their back and the interior of the doll has the appearance of bubble gum- opaque and shiny. Fortunately, Violet switched to Tenite II by 1949.

Early vinyl dolls also had problems. The oil that was added to the vinyl separated from the other components and made the surface sticky. It also caused the dolls to shrink. Most of the early vinyl dolls - Terri Lees and Linda Lees - were disposed of because of the sticky substance, making them scarce today. When the problems were worked out for Linda Lee, she was reinstated into the family of dolls after the move to California. Her name was changed to Linda Baby. Later, So Sleepy (a closed eye Linda) was added. Then came along Cocoa (a brown Linda) in the open and sleep eye versions.

Terri Lee had a life time guarantee and many of these vinyls were returned to the factory and were replaced with hard plastic dolls. Once the problems with the manufacturing had been solved, Violet turned her attention to her first love - fashion.

Disaster struck the company, still located in Lincoln, Nebraska, on December 15, 1951 when fire engulfed the second and third floors of the building that housed the Terri Lee Company. The building was a total loss. Fortunately, Violet was covered by insurance. Despite rumors stating the factory was leaving Lincoln, it resumed operations temporarily on “O” Street. This location became the permanent headquarters of the Terri Lee Fashions, Inc. Violet did finally go to Apple Valley, California and purchased property to build her new factory. Throughout it all, the wiggers and sewers in Lincoln carried business on as usual. For seven more years, that part of the business would stay there.

1951 saw the introduction of the platinum blond wig, single stroke brows, and Violet decreed that her dolls would have five upper eyelashes on the left eye and three on the right. The artists were left to their own imaginations as to how long, how curly the brows and eyelashes. The variations are many. Later, the artists would start marking the dolls with a dab of color at the base of their hair line or on the crossbar inside the head as a form of signature.

March 6, 1952 the company broke ground for the new doll factory in Apple Valley. They hired between 150 and 250 employees. New molds were purchased and the “patent pending” was removed from the back of Terri Lee. The plastic became lighter in weight. New artists were hired, giving Terri a new look. One hundred thousand dolls were produced. All was looking rosy. Then…

A new problem surfaced - the new and improved plastic split at the seams. The new molds (dies) were not true or exact. The new plastic had memory which prevented it from being successfully glued together. Tiny Terris and Connie Lynns had another problem. The plastic used for the eyes and the plastic used for the heads were not compatible, thus preventing the eyes from moving freely.

To top it all off, Violet had hired a secretary, Kathryn Kay Fassel, who was untrustworthy. Ms. Fassel left the company and began to market a Terri Lee look-a-like with sleep-eyes and a walking mechanism. This doll caused serious damage to the Terri Lee company during 1953. A settlement of dispute removed the Mary Jane doll from department store shelves and Ms. Fassel's company had to destroy the offending look-a-like head mold. She then replaced it with a soft vinyl head with rooted hair and continued on her merry way into 1956.

An extensive expansion program was planed for April, 1957. The loan for this expansion put the company into great debt. Violet Gradwhol was spending outrageously. Her attention to business had lessened considerably. Most of running the business was left up to Grace Hast.

Grace left the company when a disagreement arose between her and Violet. Violet then sought out the advice of Marvin Miller, a financial adviser from Los Angeles who, in essence, was a shyster on probation for embezzlement and falsification of corporate records. She paid Mr. Miller a $1000 to audit her books on November 14, 1958 and fire destroyed the Terri Lee Factory No 2 on November 20, 1958. Mr. Miller was arrested and convicted for arson. Because of her involvement and testimony in behalf of Mr. Miller, Violet's reputation was greatly damaged. Because of her involvement, the insurance companies refused to pay off. Finally, April 29-30, 1960, the Terri Lee Plant was auctioned off.

There was a very short period of time when Magna Enterprises sold Terri Lee merchandise. Then Mar-Fan stepped in with a succession of other companies following. Somewhere in this mess, around August 1, 1961, someone made the Talking Terri Lee. Mar-Fan claims responsibility for it. In October of 1962, Violet demanded that all her molds be returned and production to cease.

Litigation followed that would make a seasoned lawyer pull his hair out. The molds were tied up until March, 1965. Once given back to Violet, it was just too late for her to start over. The era of hard plastics had ended. The Terri Lee Doll business died in litigation.

But — Those of us who knew Terri, had her for a playmate and a friend, we have dusted her off, cleaned her up and now display her proudly. All of this information can be found in the blue Fashionable Terri Lee Dolls book written by Peggy Wiedman Casper. I hope you have enjoyed my “Readers Digest” synopsis of the Terri Lee Story. Thank you for visiting. Please come back soon.